My one dedicated reader, who refers to herself as The Peanut Gallery, put a note in the blog suggestion box regarding tattoos. I think it’s a good subject to discuss. Now that I have one, I think I can speak semi-intelligently on the subject. You are probably not going to agree with me.

Which is totally cool.

Tats have been mentioned on my blog before. Here and here. I have never hidden the fact that I have a tattoo. It is on my left forearm, inside, near my wrist. It has significant meaning to me. I don’t refer to it as “ink” or “body art.” If I ever get another one, it will tie in with the one I already have. My tat is a heart with the initials A B O. I wanted something kinda girly and it is. Even though The A B O stands for Andrew Bryson Odenthal, who was anything but girly. He was big and brawny and manly and funny and a hugger and a kisser. He had the most beautiful eyes and his belly laugh was beyond contagious. *stopping now for a cry session* 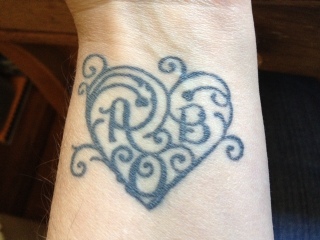 Okay, I’m back. I don’t even have to be talking about him to start crying. Sometimes it just happens. Grief is like that. Blog post/book on grief coming up someday.

He was just shy of 23 when he died. My sister and my brother-in-law started the whole “getting a tattoo in Andy’s memory” thing. Andy had a tat. It was of a phoenix. It was huge. And beautiful. My sister’s tat is on her inside forearm also. Angel wings with a heart in the middle and Andy’s initials. My brother-in-law has the Super Man logo with ABO and followed that up with a replica of Andy’s phoenix, using the the same template the tat artist used for Andy’s. My niece, Minz, has at least one in his memory and so does Andy’s fiancee, Megs. And then there is The Wild Boy. This is where you will probably disagree with me about the whole tat thing. I signed his permission form to get his tattoo. My Man was there, also. As were a whole group of people to support him. He has a cross with Andy’s initials. It is not little, by any means: 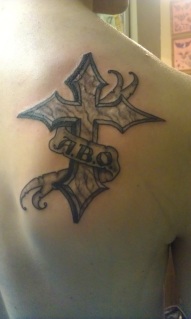 He was very brave. It hurts like the dickens. I know mine did. His tat is on his shoulder, an even more tender spot. See that shading on the left outside? OUCH. Big time. Again, he might never have gotten a tattoo if it hadn’t been to honor his cousin’s memory.

So, back to tats in general. The Peanut Gallery wanted me to address the whole when did tats become acceptable in polite society and did I get one just to be rebellious and thumb my nose at authority. Okay, so that last part…if I had known I could even get a tat back when I was a teenager, I would have been All. Over. It. for just that reason…the entire rebellion thing. I would probably have a ton of random, wish-I’d-never-done-it/what-was-I-thinking tats. Thank You, Jesus, that tats didn’t become popular until I was old more mature. Now? My Girl says getting a tat is sooooo boring. Overdone. Blase. Been there, done that. If you are just getting one now…you are so late to the par-tay.

Back in the day, the only people I knew who had tats were ex-military and biker-dudes. I would imagine that when gangs became popular, more mainstream, that was a great way to prove you were a member. Probably after that, the more rebellious teens and young adults started doing it and a new fad was born.

I know there are folks in the business of religion who think that tats are not for Christians, and they have scripture to support their position. I actually tend to believe they are correct in their interpretation. However, being a sassy girl who is not known for her obedience, getting a tat seemed right down my alley.

Let’s stop a moment and discuss tat location dos and dont’s. I purposely chose the location of my tat for two reasons: it is for ME to see and be reminded. In fact, the tattoo artist (who had also done Andy’s and the rest of his family’s) was really ticked that I chose to have my tat facing me and not facing out. She said that tattoos are for other people to look at. I got mine for me to look at. Period.

Second reason for choosing my tat location: the wrinkle/sag factor. Probably enough said on that.

So, there you have it Diane Peanut Gallery. I hope I answered your questions. Can’t wait to see your new tattoo! *grin*

One thought on “Tats.”