This was our day. Chilly, rainy, sleety, snowy, and icy. Sounds like five of the Dwarfs from Snow White. It was pretty yucky out and the roads were slippery. Which didn’t bother me as I sent all the minions out to do my bidding and remained indoors, nice and toasty. A perfect day to make our favorite soup.

If I could find my original recipe card you would see this:

That is how the recipe was given to me by a sweet friend I worked with at The Firm many years ago. She has gone on to be with Jesus now, but she was the real-deal Italian and told me this was her momma’s exact recipe, then her recipe and now mine. Please note that by definition, pasta fagioli means “pasta and beans” and originated as a peasant meal that did not include meat. Ellen told me her momma added whatever meat they had that she wanted to use up. I always make ours with ground beef because that is how my people like it.

Don’t worry, I’m not going to leave you hanging with just that little bit of information for the recipe. Here is what I did to make this today:

Get your pan nice and toasty and pour in Extra Virgin Olive Oil. I just eyeball it. While the pan is heating up, dice 2-3 carrots and toss those into the hot EVOO. Give them a stir so they are nicely coated with that yummy olive oil. Dice up a small onion and toss that in. Give another stir. Dice up or smash a few garlic cloves. Add those right on in there. Let them cook up a bit. 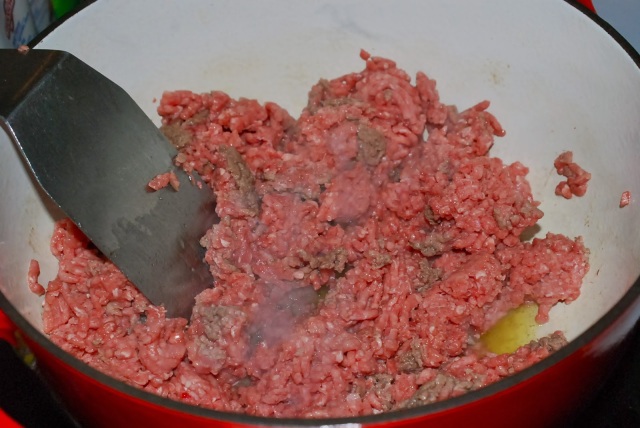 Get another pan heating up. Add a splash of EVOO. Toss in a pound of ground beef. This is actually two pounds of meat. I will use one in the soup and the rest of the meat later on this week in a batch of chili. Cook that on up. I use my metal spatula to really chop the ground beef fine. I know that some folks like to cook their ground beef in the carrots/onion/garlic/EVOO mixture but I always find my garlic gets overcooked when I do that. Just a personal preference. Besides, I like to use as many pans as possible when I cook.

Heat up a saucepan of water and once the water is boiling, cook some pasta. This is what I used. I have never seen them before. Mom sent them home with me yesterday. She sent home a couple of bags of goodies. There were two packages of these. Love. Them. Cook them right up, according to the instructions on the package. You can use any small pasta. But, in times of desperation, we have been known to use penne or rigatoni. 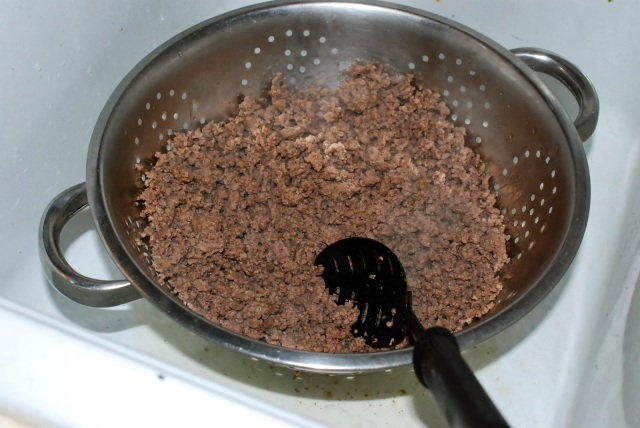 Once the meat is cooked through, drain the EVOO off. And then, if you are like me, rinse the meat in hot water. I do this for a couple reasons. 1) Since my first pregnancy, I cannot stand cooking ground beef. The smell, the texture, the taste…bleck. 2) To rinse off some of the fat. 3) There is plenty of EVOO absorbed in the carrots/onion/garlic. Trust me.

After you let the meat drain a minute, add the meat and the carrot/onion/garlic mixture into your stock pot, assuming you can find where your children hid it when they emptied the dishwasher/washed up the pots and pans and put them away. Otherwise, you can use your braising pan, like I was forced to do. 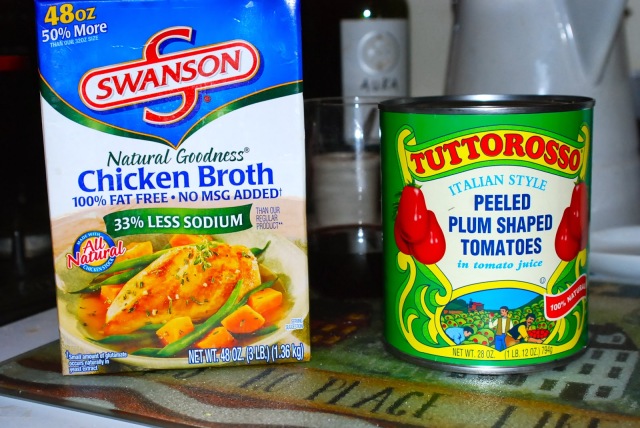 Pour in a large container of chicken broth. Or water and chicken bullion or base. Or vegetable broth. Whatever you have. I used one large container of low sodium chicken broth at this point. Open a can of tomatoes. This is a big can. Which is exactly what I asked my people to buy for me at the grocer this morning. I only used half a can. I dumped in about half of the tomatoes and half of the liquid. I cut into the tomatoes once they were in the broth to release all of the juicy yumminess inside and to make bite-size pieces.

Disclaimer: None of us will eat cooked tomatoes. Some of us (okay, just My Girl and I) love fresh sliced tomatoes. The boys do not. We all love ketchup and spaghetti sauce and pizza sauce. We avoid cooked tomatoes like the plague. 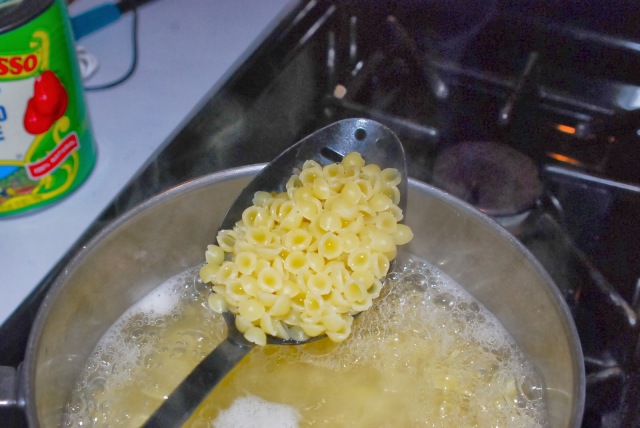 Spoon the pasta out of the water straight into the chicken broth mixture. At the end, I pour the last of the pasta with about a cup of the starchy water right on it. Thickens it up a bit.

Add a little salt at this point, if you would like. Keep in mind that if you are like us, you will add freshly grated Parmesan to your soup just prior to eating. This is my salt cellar. That is my baby spoon. That is also a glass of Chianti. You’re welcome.

The beans. I did not take a picture of the beans because…I didn’t have any. I had to send The Big Boy down to borrow a bag of frozen great northern beans from bff, Mrs. D down the street. I promised her a bowl of soup in return. I have to break that promise. This morning, the morning after making the soup, there is only a cup of it left. Apparently, I will be making that chili today instead of later on in the week. This soup is delicious, people.

After the soup cooked for an hour or so, I did add another container of chicken broth because the pasta continues to absorb the liquid. I’ve also been known to add a few handfuls of baby spinach at the end of the cooking time. Yes, I am positive kale would be lovely also, Mrs. D and Mrs. S-S.

We baked a loaf of crunchy, store bought, french bread to go with. Spoon the soup into a bowl and grate fresh Parmesan over the soup and dig in.

Sorry I don’t have a picture of the finished soup, in a bowl, sprinkled with cheese…honestly it went so quickly…